The desired application in mist control motivated us to dig deeper into the association of these telechelic polymers, expanding the range of chain length (10 to 700 kg/mol) and concentration (dilute to semi-dilute), and comparing pair-wise associative with self-associative telechelics.

Building on the prior literature on self-associative systems (like hydrophobically end-associative polymers1), new phenomena can arise by virtue of the nature of hydrogen-bonding end groups. Acid-ended telechelic poly(1,5-cyclooctadiene)s (A-PCODs, self-associative) demonstrate a highly temperature and chain-length dependent sol-gel transition in non-polar solvents.  Furthermore, we discovered that chain length dramatically affects the phase behavior of A-PCOD solutions. To explain the temperature and chain length dependence, we hypothesize that the aggregation number (p: number of chain ends in one micelle core) decreases with both increasing temperature and increasing chain length, despite prior literature mostly assume constant p.

In contrast to self-associative system, which forms "flower-like" micelles at low concentration and form gels through bridging at higher concentration, pair-wise associative polymers are expected to build linear supramolecules, which should resemble covalent linear chains to certain extent but exhibit new properties due to end association. Our preliminary data indeed show this phenomenon.

Conformation of bottlebrush polymers in solution 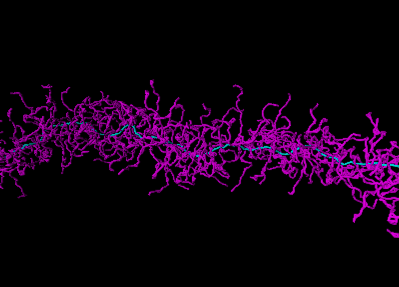 Bottlebrush polymers (or polymacromonomers) are polymers in which the monomeric constituents are also polymers resulting in a hierarchal structure with two polymer domains:  side chains (purple) and backbone (blue).  Linear polymers adopt a conformation the maximizes the configuration entropy, however, bottlebrush polymers take on an extended conformation due to the excluded volume interactions of the densely grafted side chains counteracting the entropic driving force.  The overall shape resembles that of a bottlebrush as can be seen in the figure taken from simulations. There have been theoretical, experimental, and, more recently, simulation efforts to elucidate the behavior of these molecules in dilute solutions.  These results led to a controversy in the past three decades.  Our goal is to resolve this controversy using various scattering techniques:  static light scattering (SLS), multi-angle light scattering (MALS), and small-angle neutron scattering (SANS).  With the new insight, we aim to study the semi-dilute behavior with small-angle X-ray scattering (SAXS).

The Role of Macromolecular Architecture in Flow-Induced Crystallization

Semicrystalline polymers are processed predominantly from the melt, for example in fiber-spinning, injection molding, and film-blowing. During processing, the polymers are subject to intense shear and elongational flow, which can orient and stretch the chains. Oriented crystallization can result, which significantly alters the crystallization kinetics and final structure, and thus material properties. If the stress is sufficiently high, threadlike precursors may grow from these point-like precursors.  These threadlike precursors, "shish", propagate along the flow direction. The shish nucleate chain-folded lamellar crystals, "kebabs", which grow radially from them.  The longest, slowest relaxing chains play a disproportionate role in the formation of the threadlike precursors. However, their exact role remains unclear.
Our goal is to discover the "mechanism of action" of the slowest-relaxing chains in the tremendous enhancement of formation of oriented precursors during flow-induced crystallization of polymers and understand the mechanism on the molecular level. 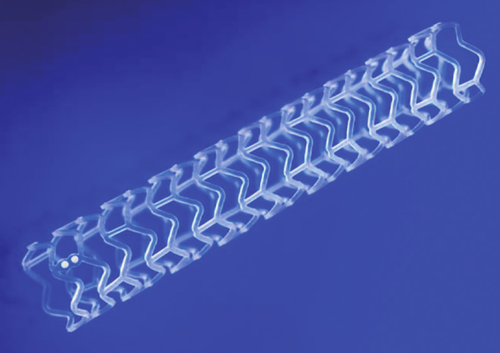 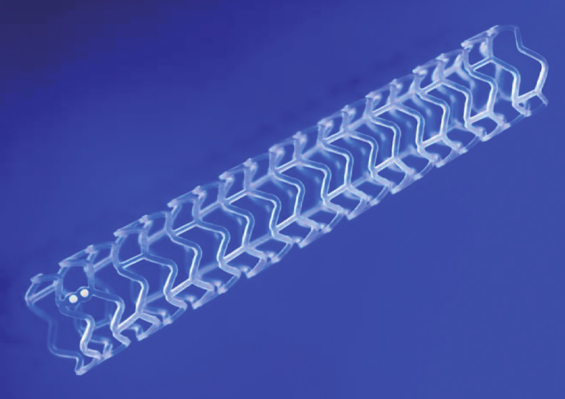 Cardiovascular disease is the main cause of death in Europe and America claiming over two million lives each year. Over one million patients in the US alone receive stents each year to open coronary arteries and maintain cardiac health.  Current stents are made from metal alloys which induce critical side effects such as Late Stent Thrombosis (LST) and chronic angina. These complications occur as metal stents are permanent fixtures in the body. Therefore, there is a need to move beyond metals towards a transient material to overcome LST and angina. Bioresorbable vascular scaffolds (BVS) function like stents after implantation, holding the artery open, but completely disappear in 2 years, restoring vasomotion and vasoresponse. Clinical trials of BVSs have reported promising results with no incidence of LST. The material which has made transient vascular scaffolds possible is the polymer poly (L-lactic acid) (PLLA).

Amorphous PLLA is subjected to tube expansion and laser cutting to make a scaffold. The laser-cut scaffold is then crimped onto an inflatable balloon and coated with anti-inflammatory drugs. The surgeon guides the crimped scaffold towards the affected artery and deploys it by the expansion of a balloon. PLLA is known to be a stiff polymer but it survives the intense deformation during tube expansion, crimping and deployment. We hypothesized that the strength needed to survive this deformation must come from the underlying morphology of the scaffold. My previous research used a combination of polarized light microscopy and synchrotron X-ray beamlines to investigate the structural changes that occur in PLLA scaffolds during crimping and deployment. We discovered that crimping creates a multiplicity of morphologies in a single PLLA scaffold. This imparts the scaffold with the strength necessary to undergo deployment and to support the occluded artery. The morphology developed during the processing of PLLA vascular scaffolds governs the therapeutic function and in-vivo performance of the scaffolds.

My research at Caltech focuses on the investigation of novel nanocomposites of biocompatible and biodegradable polymers and inorganic nanostructures. Incorporated at a few percentage amounts into the polymer, inorganic layered materials (such as metal dichalcogenide nanotubes) have great potential to promote polymer crystallinity and reduce brittleness which is a major limitation for application to bioerodible polymeric vascular scaffolds.